This was the third year my library held its annual Halloween Runway Party (see last year). By far one of the most popular family events, it was created by my director as a way to have Halloween fun without the competition – every child is a star. Each child is announced by name and costume, then they walk down the orange carpet to background music while their families take pictures.

Last year, I expanded the event to include activities in addition to the runway. This year, I expanded the number of activities significantly. We did not have any comic books from Halloween ComicFest, but that was because September and October were insanely busy months for both myself and the director, and we never put in the order for the comics.

Poke-a-Pumpkin – My mislabeled station was popular last year, and was popular again this year. I put small, inexpensive treats in each cup – beaded bat necklaces, bat rings, squishy eyeballs, Halloween tattoos, etc… A single layer of tissue paper was rubber banded over each cup to hide the prizes. To get to the prizes, you jab your finger through the tissue paper.

Pumpkin Guts (from Stir the Wonder) – A station intended for littlest children, but all of the children present spent some time squishing guts around.

Paint Mix Pumpkins (from Sunflower Storytime) – I used this as an activity at a storytime, and thought it would be good to use again since several attendees were under the age of 2. I learned from previous experience that duct tape over the top of the baggie is a must – enthusiastic smooshing can cause paint to leak out. 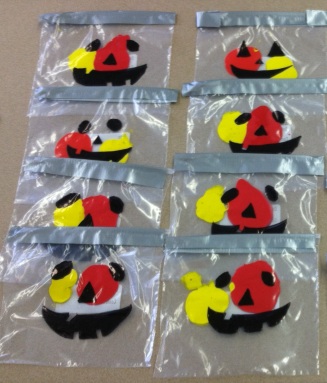 Squawking Pumpkins (from Miss Mancy – website not working ) – I did a non-Halloween version of these with my Girl Scout troop last year, and they loved them. When I came across a version that turned them into jack o’lanterns, I knew I had to do them at my library. A volunteer prepped them by stringing the yarn and paper clip so all the children had to do was decorate it and play with it. I highly recommend using a drill to make the holes in the base of the cups.

The basic directions: tie a piece of cotton yarn to a large paper clip; put the string through the hole; hold the cup in one hand, and with the other hand wrap a wet (not sodden) paper towel around the string and pull down. An annoying squawking noise is made by the wet paper towel/string and amplified by the cup. Physics at its funnest. 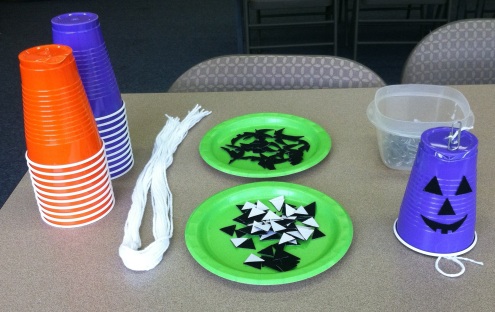 Egg Carton Pumpkins – I know variations of this are floating around the internet, but I got the idea from a craft I did with my Daisy Girl Scouts. We made Girl Scout Promise bugs from blue-spray painted egg cartons. It was easy enough to translate the idea into pumpkins.

Candy Corn Puff Paint (from Growing a Jeweled Rose) – I’ve used shaving cream/glue paint multiple times during storytime, and it has always been a hit. I had a bunch of leftover candy corn coloring pages from last year, and decided to reuse them.